Yesterday I achieved something I had previously considered impossible. I completed a 5K run with Cybi Striders running club after completing a Couch to 5K programme with the club.

Now that may not be a huge deal for some people but as someone who is very much deskbound by virtue the nature of my writing, I never considered running was something for me. Add in a profound lack of fitness and I considered the very idea of running for any length of time ludicrous. But every week I turned up and met an amazing group of people in the process.

At the end of every session, we had homework slips with details of the amount of running we needed to do in between our weekly sessions together with motivational quotes. The last one was:

One of the greatest feelings is accomplishing something that you once thought was impossible.

It proves that with determination and persistence, we can reach our goals and when we do, the sense of achievement is incredible.

So here’s to the impossible and may we keep trying to make it possible. 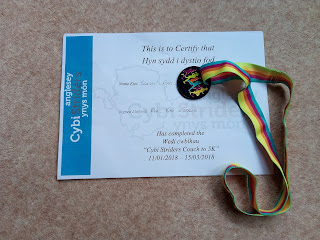