I think that there are several things that happen when a writer starts a new book or a completely fresh project, some of them good, some bad and then there are some that come along just at the right moment. So today's inspiration struck me as totally apt as I start writing my new book.

We're bombarded by information every day but there's something about being told to 'just write' that's freeing. The idea of writing a book, all 55,000 words in my case, is daunting. There's so much to consider from the conflict to plot to a convincing emotional journey and I've been guilty in the past of trying too hard and not letting the characters tell the story they want rather than what I want. 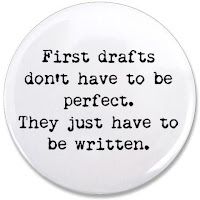 So I'm going to try and remind myself that - first drafts don't have to be perfect and in almost every case they're not. They just have to be written. I can edit it better later.
Posted by Sarah Snowdon at 09:58 3 comments: